At the upcoming Modern Language Association conference, I will join Amanda French and Eleanor Shevlin on a panel called “The Library of Google: Researching Scanned Books,” which is sponsored by SHARP and will be moderated by Michael Hancher.  Google Books has already scanned over 7 million volumes (more than many research libraries hold) and, according to Planet Google, aims to scan every volume in the WorldCat catalog, around 32 million. Our panel will focus on the significance of Google Books for literary research, looking at questions such as whether scholars can trust it and how they should deal with such plenitude.  I plan to discuss my study examining how many of the works in my dissertation bibliography are now available electronically, as well as more recent work using Google Books and other online sources to explore the history of a nineteenth-century bestseller, Donald Grant Mitchell’s Reveries of a Bachelor (1850).  Reveries fascinates me—not so much because I identify with the bachelor narrator’s fantasies and fears of what it’s like to be married (actually, I find the book kind of cloying), but because I’m intrigued by Reveries‘ cultural impact from the 1850s into the early twentieth century.  It sold at least a million copies and appeared in dozens of editions,  from a cheap edition selling for 8 cents to a $6 gift volume in an exquisite morocco binding.  Emily Dickinson loved it, as did readers who evinced their admiration by sending fan letters to Mitchell or making marks in the margins of their book.  In this blog post, I’ll focus on how I’ve employed Google Books to illuminate Reveries‘ publishing history; future posts will look at reader responses, textual history, and authorship.

For a graduate seminar on textual editing way back in the 90s,  I developed an online critical edition of the book’s first reverie.  I also wrote an article analyzing a series of letters that Reveries’ publisher, Charles Scribner II, sent to Mitchell to negotiate the pricing and physical form of new editions between 1883 and 1907, as the publisher and author worked to sustain the popularity of the book and maintain their hold on the market after their copyright expired.  But my publishing history is incomplete; I want to know more about the different forms Reveries took, how it was advertised, what the prices were at different times, how well the book sold, what marketing strategies Scribner and other publishers pursued, and whether Reveries is a unique case or fairly typical, at least for a nineteenth century bestseller.

By using Google Books, I’ve been able to fill in some details about the book’s publishing history, particularly about pricing and advertising.  As amazed as I am by ability to search across millions of books for references to Reveries, I’m also somewhat frustrated by the strange ways that Google Book search works (or doesn’t work) and disappointed that some materials don’t seem to be available. 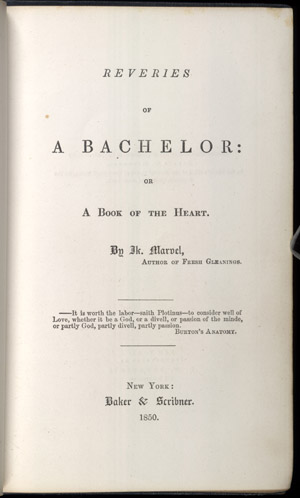 Title page of 1850 Reveries of a Bachelor

What I already knew:

To determine how many Reveries related works were available in Google Books, I did a keyword search for “Reveries of a Bachelor.”  The total number of results fluctuated; one day it was 641, another 916, another 809.  But forget about getting to result #641.  One result screen says: “151 – 200 of 809,” but then the next one says “Books 201 – 220 of 220.”  Huh? So what happened to everything else?  Perhaps duplicates are eliminated as you make your way through the results (although there were plenty of duplicates in the results I looked at), perhaps the algorithm used to calculate the number of results is, er, inexact and shifting, or perhaps Google figures you don’t really want to look that many results anyway.  Whatever the explanation, I can’t help wonder about what I’m not getting to see, so my trust in Google Books is diminished a bit, even as I feast on the plenty that is available.

In any case, I looked at each result available to me, discarding those that weren’t really focused on Reveries and grabbing the bibliographic info for the rest through Zotero.  (I love Zotero, but I was a little frustrated that it didn’t capture the URL and publisher info for  Google Books, which may have to do with the way that Google makes available that information.)  When I wasn’t impeded by texts that offered only snippet views or no preview at all, I copied out a chunk of text that contained the Reveries reference and dumped it into a note in Zotero.  Categorizing as I waded through the results, I added a tag or two for each work, such as “reveries_ad” or “reveries_review.”

Since Mitchell used the pen name “Ik Marvel,” I also searched for “Ik Marvel” (1285 results, today) and “Ike Marvel” (606 results); I’m still working through those results.   I used TAPOR to generate a list of word pairs in Reveries that I hoped to use in searching for works connected to Reveries, but there were only a few pairs that seemed at all unique, such as “Aunt Tabithy,” the name of a character in the book. 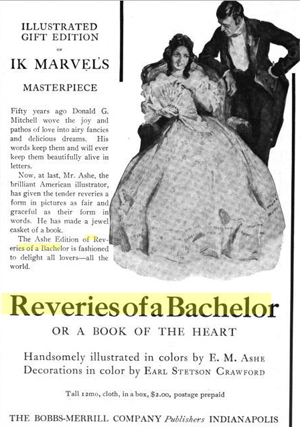 What I discovered about publishing history using Google Books

In my next post, I’ll look at how using Google Books is helping me reconstruct the history of readers’ responses to Reveries.

This entry was posted in research practices, search. Bookmark the permalink.